MONARCH: Malikat, you have quite the resume. How did you begin the journey of becoming a global warrior for inclusivity?

MALIKAT RUFAI: I am quite literally African American in the sense that my mom is Black American, a child of the diaspora, and my dad is both Nigerian and Ghanaian. I think that upbringing—kind of existing at the intersection of African cultures and American culture—really gave me a sense of curiosity about the world. I think that was a natural connection for me to the State Department, and that started my journey as a foreign affairs officer. My first kind of introduction into that career was actually through the Pickering Fellowship. I received that fellowship as a sophomore at Spelman College in Atlanta, so a shout out to all my HBCU alums.

I then went on to Johns Hopkins School of International Studies in DC before starting my career at State and working in a variety of settings, including Vietnam, Haiti, and our operations center, which is really kind of the engine of diplomacy at the State Department, getting a real 30,000-foot view on a lot of our most pressing foreign policy issues. That then led me here to the National Security Council at the White House, where I’ve been focusing on partnerships and global engagement.

MONARCH: Very impressive. There are a lot of responsibilities that come with your career. Can you share a few that you may not have been expecting? 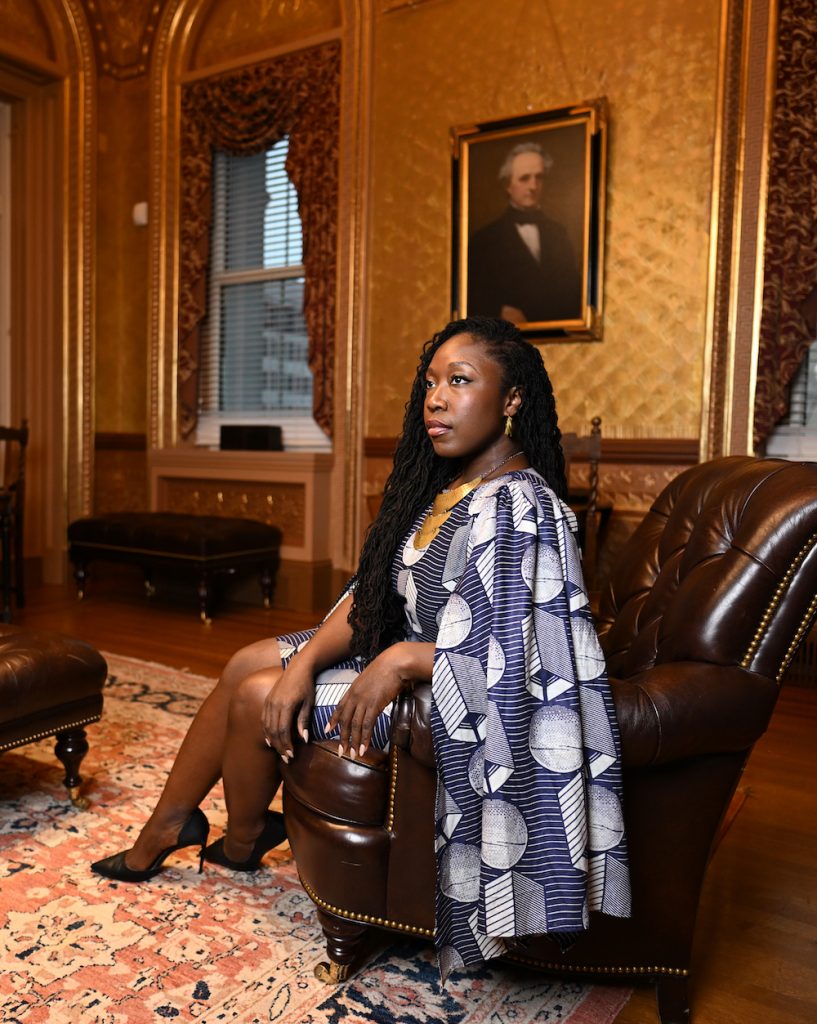 MALIKAT RUFAI: One of the first things I learned is that there is never a moment that you stop being a diplomat. It’s one thing to represent your family, friends, and yourself, but there is an added responsibility when you are also representing the entirety of the U.S. government as well as the American people. In addition, being very intentional about including as many people at the policy-making table as possible to ensure that what’s produced is reflective of the widest scope of perspectives and stakeholders as possible.

MONARCH: What is unique about this Administration’s efforts on global outreach in regard to the entire diaspora, African Americans along with African culture?

MALIKAT RUFAI: It is so exciting from a policy perspective to see the diaspora really called out specifically as a target community and understanding that they have an impactful role to play in our foreign policy toward Africa. But I think what’s more exciting is, aside from just the policy callout, you’re seeing the demand signal from the diaspora itself. There is so much excitement within African American communities, within Black British communities, etc., to have a connection to the continent, and it’s not just the cultural connectivity that is critical. It’s also members of the diaspora going to the continent to start businesses. You see partnerships being created across the creative industries, collaborations between musicians. You see educational partnerships being cultivated. So there is a desire for that connectivity, and there is fertile ground for this kind of policy refocused on the inclusivity of the diaspora.

MONARCH: I appreciate the sincerity in the efforts toward inclusion, and I think the best vehicle that’s being used has been the arts, including African Americans and primarily African cultures. I think that many companies and even individuals, whether it’s politically driven or just socially driven, seek diversity clout, but I don’t feel that in some cases. This need or desperation for inclusion can become very strategic and selfish and not necessarily an appreciation for the diaspora.

MALIKAT RUFAI: Yeah, I can’t agree more. I would say that as it relates to the creative industries. The reason why we are prioritizing it in particular for the diaspora forum is because it just makes sense. The connective tissue culturally, as I mentioned, is incredibly important. But you know, I don’t think a lot of people realize that the creative industries contribute over 6.1 percent to global GDP. And that’s annual revenues of over two trillion dollars, which also accounts for about 50 million jobs globally.

So I think the missing piece for a lot of people is that they see the creative industries as kind of a nice to have, not understanding the robust economic growth potential and job creation potential for not only the continent of Africa but globally. When we are able to support the creative industries and also to add that policy lens and really focus on creatives as entrepreneurs, as innovators, then we get to a place where not only are we deepening cultural ties but we are also getting more bang for our buck; we’re creating real benefits for people that are tangible. And that’s what we’re hoping to see more of through the Summit.

MONARCH: Absolutely. Can you tell us your role within the Summit? 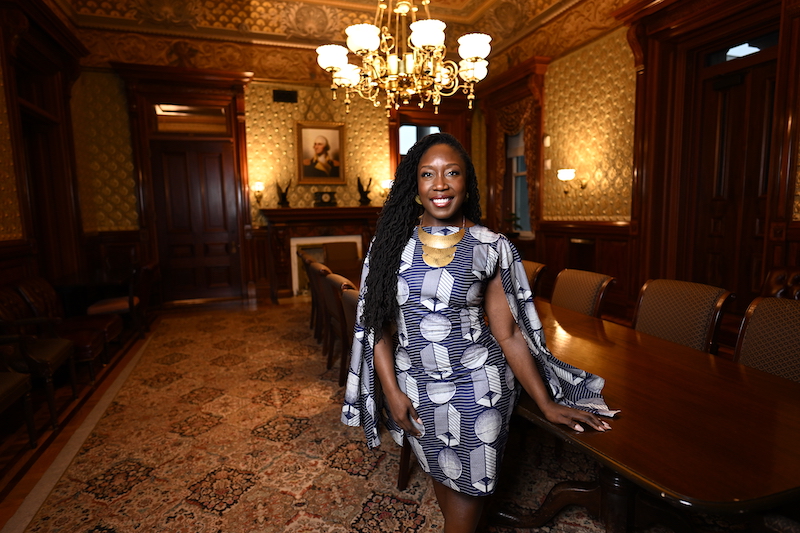 MALIKAT RUFAI: I first joined the National Security Council back in October of 2021. I was working exclusively in partnerships and global engagement, and our main priorities were really to be the two-way communication mechanism between external stakeholders who needed to have a seat at the foreign policy-making table and those within the U.S. government who were, of course, feeding into that foreign policy-making process. That was our main priority from the first time that I met Denice, when I was doing my rounds as someone who was covering Europe. I was covering parts of the Western Hemisphere, and I was covering Africa.

Here are these policy objectives that we want to incorporate, and here’s how all of this feeds into the strategy toward Africa and what we’re hoping to accomplish. And I immediately said, “Well, sign me up. I volunteer for the youth.”

MONARCH: What has brought about this drive to increase partnerships with Africa specifically?

MALIKAT RUFAI: My colleague Denice Laurent-Mantey and I had this discussion. We both believe that the youth have played an important role in spearheading the interest in Africa in the U.S. by showcasing the different opportunities in various sectors, whether digital, agribusiness, or entrepreneurship of creative industries. In addition, Africa has much to offer with the shared challenges that impact the rest of the world.

Whether it is the pandemic or strengthening health systems or increasing economic opportunity, or addressing the climate crisis, et cetera, none of those challenges can be achieved by the United States alone. None of those challenges are going to be solved without partnerships. So, I believe now there is just a genuine understanding that you if you want to go fast, go alone, but if you want to go far, go together.

MONARCH: I want to shift. I think we touched on this question and topic previously, but what has brought about this drive to increase partnerships with Africa specifically? You know, out of all the countries there has been such a drive on African culture and primarily—let me be honest with you—West African culture.

MALIKAT RUFAI: I think that’s exactly right. In addition, we have to take a kind of zoom out and look at where we are globally. As you look at the global landscape and all of the shared challenges that we have—whether it is the pandemic, strengthening health systems, increasing economic opportunity, or addressing the climate crisis—none of those challenges can be overcome by the United States alone. None of those challenges are going to be met without partnerships, so I think there is just a genuine understanding that if you want to go fast, go alone, but if you want to go far, go together. So folks are really leaning into that idea and really understanding that none of the global challenges that we face can be met without Africa.

MONARCH: Oh absolutely. What does an inclusive global community look like as a whole?

MALIKAT RUFAI: I think that’s a really good segue because for me, inclusion is not just being invited to the table but it’s also being welcomed. When I look at, for example, the global economy from the macro perspective but then I zoom, I zoom into my own life. I see inclusion as being welcomed into a space, having opportunities. This goes back to what you were saying earlier, Bianca, about things that are really more kind of…performative is what I was looking for. It is based much more on a genuine understanding that you do actually win together.

All parties have an understanding that the strength of others contributes to your strength, that partnerships benefit all of us and that widening your circle is actually to your own benefit as opposed to you doing something for someone else. I believe that’s the direction that the United States is taking by making strong attempts to revitalize the continent of Africa, really focusing on what we are doing with partners.

So overall, my depiction of global inclusivity comes down to understanding the mutual benefit of partnerships and living the mantra that we are much better together. We all win.

MONARCH: Well said. How can our audience connect with you and support your mission?

MALIKAT RUFAI: I can be reached via LinkedIn, but in general, please direct people to the State Department website. If you go to State.gov/africasummit, you will find all the information about the U.S. and African Leaders Summit and everything that we’ve been spending over a year working on with this project. We’re incredibly excited to share with you all.