Opens up about the journey to uncover her heritage. How her life has changed, and how she plans to make a difference in the lives of others. Through her work as a humanitarian

Monarch Magazine: You were an adopted child. Please talk about what drove you to find your birth parents.

Princess Sarah Culberson: Growing up in West Virginia and having this incredible family who I adore, I still had questions about my biological roots, even as a kid. 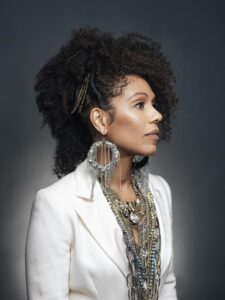 After my first year in college at the American Conservatory Theater in San Francisco, I went home for the summer and found my birth mother’s family who shared with me that she (my birth mother) had passed away. But It was unbelievable to meet the woman who raised my birth mother: it opened up this whole new world, so I decided I wanted to meet my birth father, but I was afraid of being rejected. I was also really angry at him. Then, I asked myself what it must have been like to be a 19-year-old African from Sierra Leone, attending college in West Virginia and impregnating a white woman in the 1970s. From that moment, I wanted to find him and be courageous and loving, no matter what.

Monarch Magazine: How did you discover you were a princess of African royalty from Sierra Leone?

Princess Sarah Culberson: I wrote a letter to him, and four days later, I got a phone call from a woman who said, ‘Hello, Sarah, this is your aunty. I was there when you were born!’

Then, my uncle got on the phone and said ‘Ooooooo Sarah. You have lots of royal family. Your great-grandfather was a paramount chief, your uncle was chief and you could be chief someday. You are a princess in this country.’

My birth family said, ‘We are going to contact your father in Sierra Leone, he’s going to be so happy to meet you!’

And for two weeks while they were getting a message to my father in the village, all of these different family members who were living in the states called to welcome me to the family. It was so beautiful.

Monarch Magazine: How was it connecting with your father for the first time? 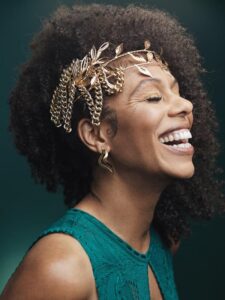 Princess Sarah Culberson: I heard my father’s voice for the very first time by phone and the first thing he said was ‘Please forgive me. I didn’t know how to find you after you’d been placed for adoption. Your name had changed; everything had changed.’

And I said “No, no, no. Please forgive me because I’ve been making you wrong my entire life just to protect myself, and I’m not going to do that anymore.”

He explained to me that my mother and he wanted me to be in a family that could really care for me and give me what they couldn’t as young kids.   I said, ‘Listen, you gave me the best family in the world, and I consider them my angels, and now I’m going to get to know you too!’

Monarch Magazine: What was it like traveling to Sierra Leone to meet your father for the first time? 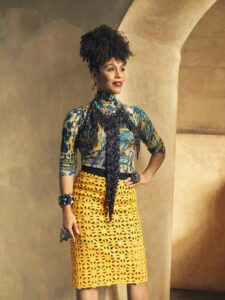 Princess Sarah Culberson: I got off the plane and was so nervous to meet him, but when I saw his face and his eyes, it was as if they were saying ‘Please like me. Please….’

And I gave him a big hug and said, ‘It’s so good to finally meet you.’

Then we travelled to his village. I was wearing a beautiful green dress he had given me, and he had on matching green shirt. When we arrived, I saw hundreds of people welcoming me, surrounding our car and the women were wearing the same green dress I had on and they were singing, ‘We’re preparing for Sarah’ in Mende, my birth father’s language. I was literally pinching myself. The girl who used to win the track meets, was the varsity basketball player, the high school homecoming queen, who was always trying to be the best. This time, I just showed up and that was enough.

Monarch Magazine: When you were growing up, what did you think about princesses? Have those thoughts evolved since finding out you are a princess?

Princess Sarah Culberson: At first, I was thinking, ‘Oh my goodness, what does this mean? What does this look like for me? Do I have to wear dresses all the time? Do I have to be perfect? Because I had internalized a certain view that we Americans have of princesses.’ As a result, I would tell people my story and never mention it. Then people close to me would say, ‘Sarah, you left out the best part, that you’re a princess!’

It wasn’t until I went to the Sierra Leone embassy in New York for a United Nations event that I discovered the difference my family was making in the country. I mentioned to a woman that my family is the Kposowas, and she froze and said, ‘You’re a Kposowa? Do you know what your family has done for our country?’

And I thought, ‘Wow, I need to embrace who I am fully. Being a princess means what I make it.’

Monarch Magazine: Describe what being royalty and being a princess means to you?

Princess Sarah Culberson: It means having a responsibility to the Bumpe chiefdom in Sierra Leone and to the country as a whole. It means listening to people in the community and addressing their needs. They asked me, ‘Would you help us get clean water and support our agricultural development? Can you help us get solar lanterns for our homes and for our children to have light to do their homework at night? Can you help young girls have access to disposable menstrual pads so they don’t have to leave school?’

Monarch Magazine: How did you accomplish those things?

Princess Sarah Culberson: We’ve partnered with an organization called World Hope to build clean-water wells and have built nine wells in the provinces so far serving clean drinking water to 12,000 people. This has helped eradicate illnesses like typhoid. Our ultimate goal is to have clean drinking water for the entire country. Our nonprofit organization Sierra Leone Rising tackles public health issues, education and empowerment. Most recently we worked with two prosthetic centers that help amputees become mobile again. Most recently, we raised enough money for Jillo to receive a prosthetic leg. She’s six. So many people donated to help Jillo including Regina King, and we will replace Jillo’s prosthetic legs as she grows.

I’ve also had the opportunity to speak at corporations, universities and high schools to raise awareness and have received support from people and organizations throughout the United States and around the world.

Monarch Magazine: What else keeps you busy these days?

Princess Sarah Culberson: I work with students at Oakwood School in Los Angeles. My memoir titled “A Princess Found” is being turned into a feature film by Disney. I’ve also partnered with Randy Jackson from “American Idol” on an animated children’s series about a princess who travels the world, learns about different cultures and protects those cultures from being destroyed. I have a TV series called “Princess Conversations,” which I’m producing with Scooter Braun and a Roblox computer game with Melon Development.

For more information on Princess Sarah Culberson go to SarahCulberson.com. To donate to her nonprofit foundation Sierra Leon Rising Foundation, go to Sierraleonerising.com.